“There is something about safari life that makes you forget all your sorrows and feel as if you had drunk half a bottle of champagne — bubbling over with heartfelt gratitude for being alive.”
– Karen Blixen (Danish author best known for her novel, “Out of Africa”)

The morning started with another softly spoken “Hello” from our camp hosts announcing morning tea and biscuits. A quick breakfast and we join our guide Raymond for another day’s drive through the Northern Serengeti. I had hoped we could witness another crossing attempt, but it wasn’t looking like there would be one today. So we headed North from Chaka Camp, crossed the Mara River and headed West. We were going to make a large loop around the Northern Serengeti during which we would revisit some of the areas we briefly explored on Day 2 and see the Northern Boundary that separates the Serengeti in Tanzania from the Maasai Mara in Kenya.

We first encountered some wildebeest that had crossed days earlier. They were making their way south in long lines of beasts that zigzagged through the bushes and across the grasslands. Among them was a lone common zebra. 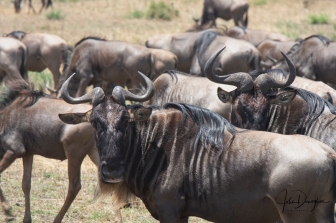 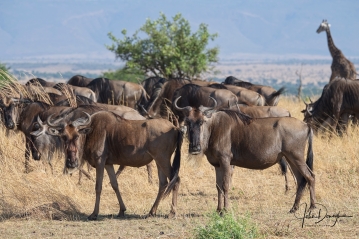 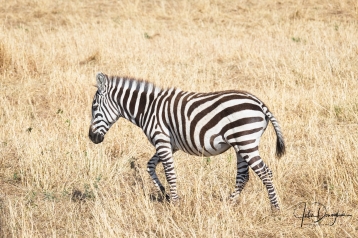 As we headed Northwest, we came across a male and female lion pair that were prowling around an area where the long grass had been completely grazed down to the dirt by the wildebeest before the headed South to cross the Mara River. As more vehicles arrived to view the lions, the pair wasn’t interested in staying around, so they walked off. Not long after viewing this pair, we found some juvenile cubs resting in the shade of a tree. 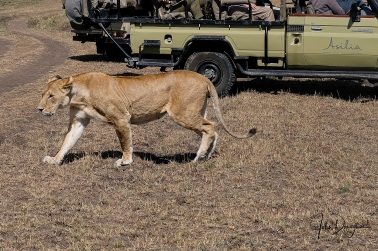 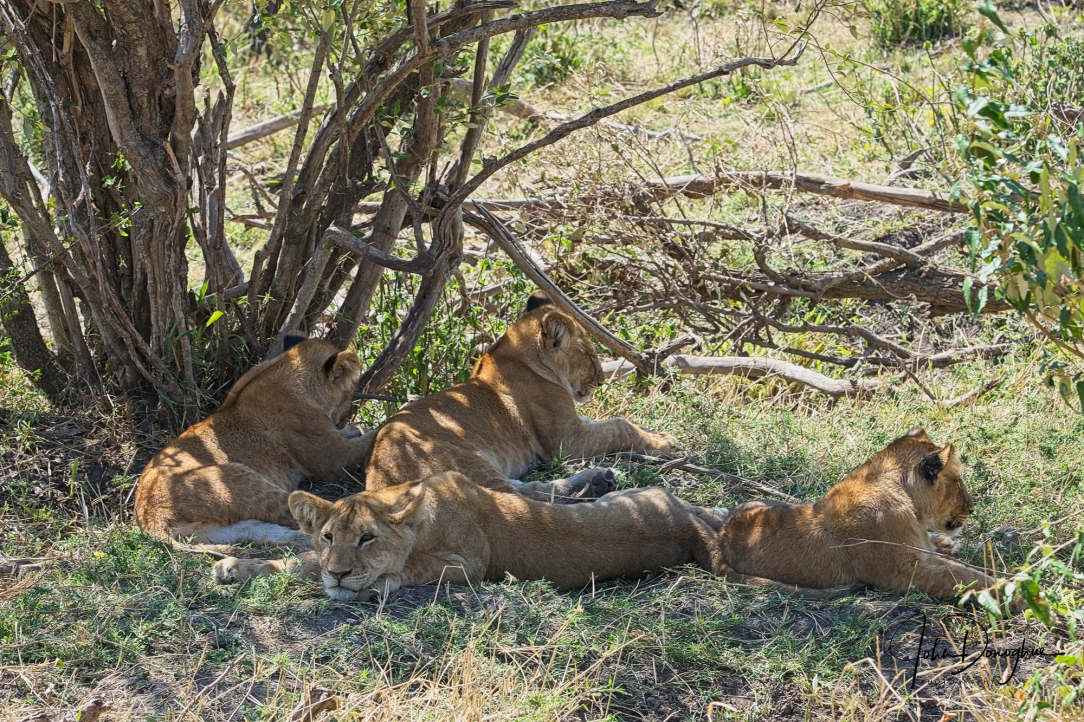 Continuing North into higher grassland, we potted two cheetah also resting in the shade of a tree. 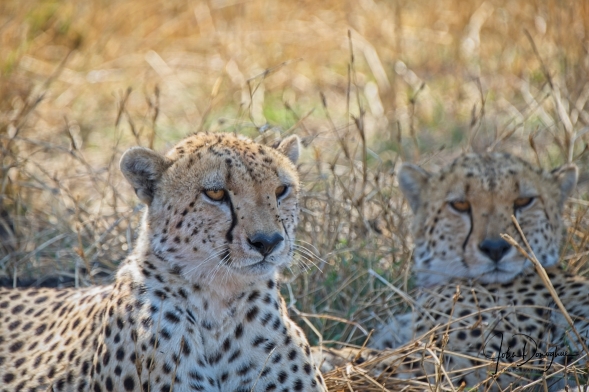 We continued heading North until we reached the Northern Boundary separating Tanzania and the Serengeti from Kenya and the Maasai Mara. 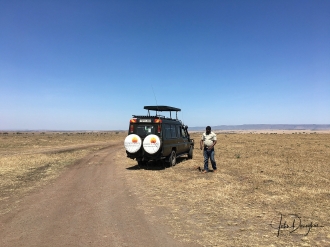 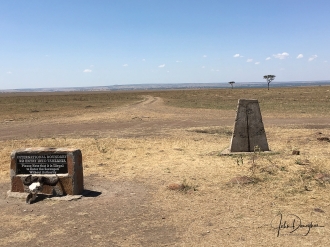 The dividing line between the two nations is a dirt road that runs diagonally from Southeast to Northwest. While the national parks on either side of that line have different names, the habitat on either side is the same. The wildebeest start their Southern migration from the Maasai Mara where they’ve spent the late summer and early fall. Then they eat their way south in a circular migration that follows the rains which provide water for the long grass to grow.

As this was the northernmost point of our journey, we turned towards the Southeast following a a generally clockwise path back towards our camp. This path would bring us to the Northeast part of the park where we would find a large herd of elephants standing in the shade of a single tree seeking shelter from the hot the midday sun. Shortly after, we spotted a small troop of baboons before heading out into the open grassland to stop for lunch. 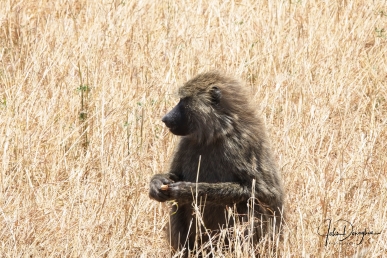 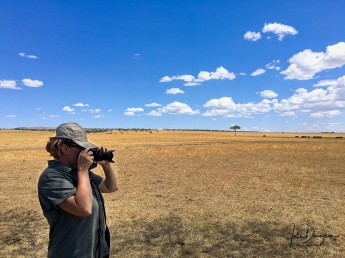 After lunch, we continued east to an area where the grasslands were interrupted with many granite rock outcroppings – small kjopes (more on that later). We passed a small family of haretbeest with a newborn calf. It was still very hot and we were concerned the calf wasn’t alive. As we waited, the family began walking away and the calf stood up and followed. Relieved, we moved on. We later found our second leopard lounging on a boulder in the partial shade of a tree. We stopped to watch the leopard on our right . To our left, two Rock Hyrax watched us (and likely the leopard too) from a gap in a large granite boulder. 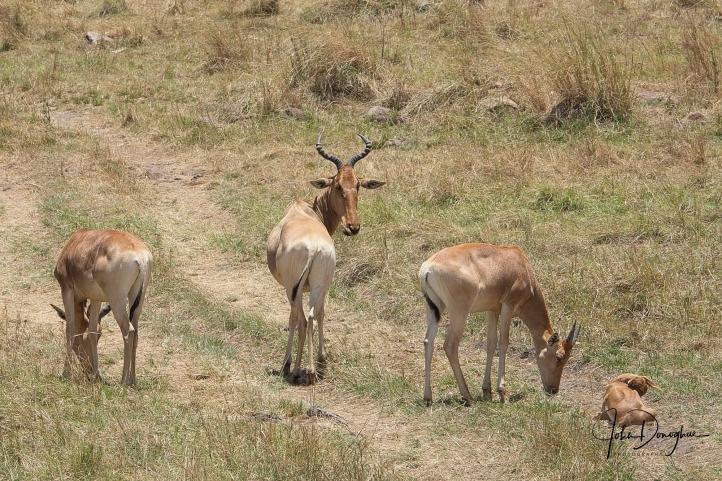 By now we’re headed generally south, the granite boulders give way to open grasslands dotted with tall acacia trees. The hot sun bends the light, and the distant scenery appears as if it is watercolor painting. As we drive, we pass a Southern Ground hornbill and a small herd of Thompson’s gazelles.

We cross a small tributary of the Mara river and then head East paralleling the river. I am standing up looking out through the pop-up roof when I mention to Raymond that I think there’s something in the grass in the distance. We drive closer and see that it’s a small pride of lions resting in the grass just above the river. We’re able to get very close and they don’t seem to mind. So we watch them for a while before we move on. 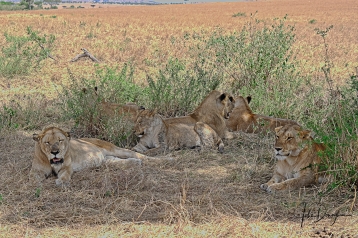 We continue following the tributary until we get to its headwaters. Then we turn South again for a long drive back to camp. Along the way we get another look at a wonderfully lit Topi where we stop to appreciate all the varied colors that make up its waxy looking coat. Further on we stop to admire a herd of elephants splashing and rolling in the mud to cool down. As we cross the river again, we stop to watch a few giraffes standing among a herd of wildebeest. The juxtaposition of the wildebeest and the giraffes was somewhat comical, as it appeared the giraffes were confused and trying to avoid the wildebeest that were nearly everywhere. 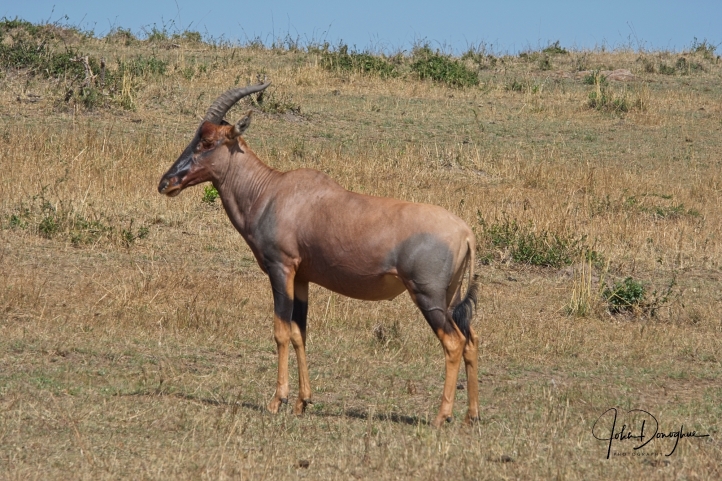 Finally, as we cross a small river near the camp we stop to watch another herd of elephants browsing in the brush and admire the determination of juvenile who was reaching as high as it could to browse the leaves of a tree that were just out of reach. Nearby, a Hammerkop walked along the river bank. Satisfied that we’d made the most of our day, we turn towards camp. Our Chaka Camp hosts await with comfy chairs and cold beers to enjoy as we recount our day with fellow travelers. 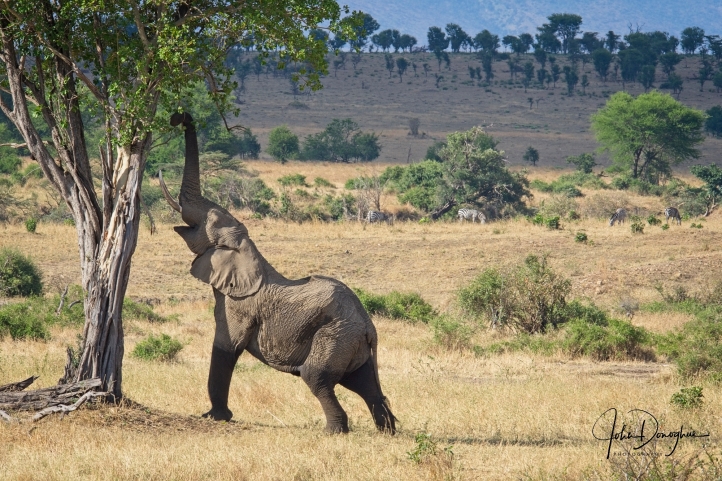 Just Out of Reach

Tomorrow is our last day in the Northern Serengeti and more adventures await.